An energy bill price cap of £1,136 a year for "typical usage" has been proposed by the regulator, Ofgem. It says th… https://t.co/jiW9igD2po
4 days ago

How much will V2G cost and when, where and who will make it happen?

Vehicle 2 Grid (V2G) could be happening sooner than we had anticipated. Nissan and energy powerhouse Enel announced at the Paris climate change summit (COP21) that they have teamed up to test trial a V2G system in Denmark.[1] The V2G system will integrate electric vehicles (EVs) and the Danish national grid charging the EVs during low demand and feeding energy back into the grid during high demand. If the trials are successful they are likely to expand into other northern European countries. 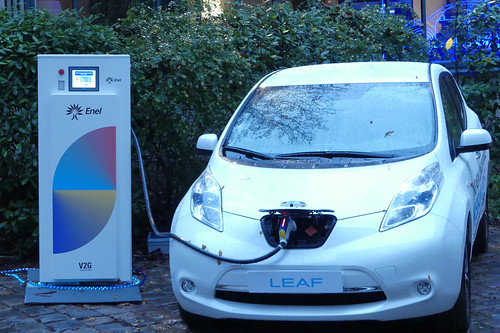 How will Nissan and ENEL's V2G help the world?

Paul Willcox, Nissan Europe Chairman commented: “Nissan is the world leader in electric vehicles. We've being doing it longer than anyone else, we've sold more than anyone else and we've got plans for the future that are more credible than anyone else. Our pioneering partnership with ENEL is a perfect example of those plans, taking the car beyond a pure road vehicle, and using it to charge your home or office. A sustainable transportation future demands better connections between vehicles, utilities, renewable energy sources and buildings. This is the first step towards a truly integrated automotive energy eco-system.”[1]

Ernesto Ciorra, Chief Innovation Officer at Enel reasoned “With increased pressure on the grid and an over-reliance on fossil fuels, Vehicle-to-Grid implementation gives EV owners the ability to store and release green energy back into the grid. This is an extraordinary time for electric mobility. This alliance make it possible to connect the dots: together, Enel and Nissan have all that is needed to bring new services to customers as well as provide them with new ways to use their cars and get returns out of that.V2G is one of the innovations that can improve our life and make the world a better place for all people now and for the generations to come.”[1]

How much storage exactly?

Nissan and Enel use France as an example where, if the existing 38 million vehicles were replaced with EVs, they could combine to form a virtual power plant of 380GW, three times the national generation capacity of France.[1]

How much will V2G cost?

ENEL tagged the cost of a V2G charger at around £600 but perhaps the government will pick up on the benefits of V2G and offer incentives to install them?[2] Even at £600, utilising your Nissan Leaf’s 30 kWh battery seems competitive with installing a Tesla Power wall with is prices at around £2000 and £2275 respectively for 7 kWh and 10 kWh units.[3]

At this point it seems more appropriate to ask when and who will make V2G happen. Nissan certainly seem to be making good progress but who would bet against the eccentric Elon Musk’s Tesla or Honda and their power of dreams? Though, it’s worth remembering that EVs are only as “clean” as the grid’s energy source. While V2G can help grid stability and shouldn't be downplayed it needs to be paired with renewable energy to really have a positive impact on carbon emissions.

Video from Nissan Denmark demonstrating the power of V2G.

Will V2G solve the problem of storing solar electricity?

Need help with any Jargon?

If you have a question about anything in the above blog, please ask it in the comments section below.

Like this blog? Keep up to date with our free monthly newsletter

0 comments - read them below or add one

You must log in to make a comment. If you haven't already registered, please sign up as a company or an individual, then come back and have your say.